Students from Budapest School of Window Dressing and Decoration and Hanna Schimek design display windows using objects from the school’s collection of materials and making reference to artists of four different periods of art: Marcel Duchamp, Meret Oppenheim, Claes Oldenburg and Josephine Meckseper. Their works have many commonalities – and they are reflections on western modern society. Found objects (Objets trouvés), commercial goods, kitschy things, humour, contrariness and absurdity are strong components of their work. All these elements were the topics of the workshop. The exhibition grants insight into the work process and its results.

BUDAPEST WINDOWS is an artistic urban-research project on the display windows of small shops and businesses. It is devoted to a medium of communication that all of us encounter every day and everywhere as we go through the city: the shop window.

With exhibitions at three locations in Budapest this project seeks to provide a vivid impulse for the preservation and continued existence of small businesses, thus contributing to the diversity and vitality of the urban environment.

The expansion of multinational corporations and online shops and the effects of gentrification are a few of the factors contributing to the rapid changes in the urban environment and the disappearance of small businesses and shops. These little businesses are places for convenient shopping, everyday services and communication, where networks can be established and neighbourhoods lived.

We understand BUDAPEST WINDOWS in terms of a reflection upon contemporary urban developments in general and as a contribution to the history of everyday life in the city of Budapest in particular. The continued existence of small establishments, with their colourful and diverse presentations and assortments of goods and services, is of incalculable value to the urban quality of life in major european cities like Budapest, Vienna or Athens… (M.F & H.S.)

Whoever looks into a shop window is cut off by the window pane from the displayed goods, which exist in another world, a world that does not belong to public space, but to that of desirable objects ...

SPOTLIGHT ON WINDOW DRESSING … Mirrored through the Eyes of Four Artists

Compilation of student sketches from the archive of the Budapest School for Decoration and Window Dressing, 2017

A broken shop window shows the traces of an accident, something that has happened: an invisible but very real border has been broken through. We could see only the different temporary and spontaneous repairs, and this minimalist visuality creates the story – performed with a non-linear dramaturgy – about that period. (J.S.)

LOVE IS THE ANSWER

In 1959 Richard Nixon, then vice-president of the US, had offered the Soviet premier Khrushchev a glass of Pepsi at the Pepsi Cola stand of the American National Exhibition in Moscow; Khrushchev reportedly drank it down with delight. For the Pepsi brand this event opened doors into the Soviet Union and other Warsaw Pact countries. While exploring the city in 2016/17, I was able to locate and photographically document a small handful of advertisements still remaining in the cityscape. (M.F.)

Havanna was a two-month intervention in the Havanna housing project in Budapest in 2006, involving the rental, restoration and running of one of the many empty shops in the neighbourhood as a “Business Advice Seeking Office”. The video is a self-reflexive documentation of the intervention narrated by the artist. (M.E.) 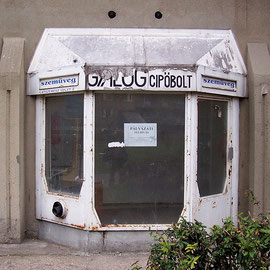 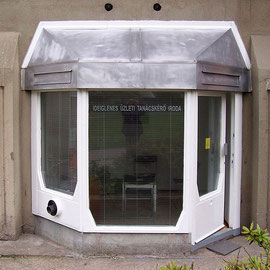 VICTORIA SQUARE PROJECT (VSP) in Athens, Greece, is a social sculpture created by the artist Rick Lowe; born within documenta14, it has been engaging the people of the Victoria neighbourhood and beyond. Since April 2017, more than 50 different creative and social activities, involving both children and adults from different backgrounds and cultures, have been organised. documenta14 is now over, yet the project’s existence appears essential to the community that wants it to continue its daily social and educational activities, since it has already changed the profile of the neighbourhood for the better. (V.S.P.)

THE POSTMODERN OF THE POOR

The political system of the ’80s in Hungary bent before the words of the West spreading through the new parabolic antennas. Total state control became looser and the private sector took control over small-scale industries. More and more plastic moulders, dressmakers, leather-goods manufacturers etc. started working in the ground floors of suburban buildings. Their new products, based on western models, sought a new setting, instead of the brownish-greyish, derelict shop portals that were ubiquitous in Budapest. Thus they recreated in their own image not only the interior decoration of the shops, but the shop windows and the facades of the buildings as well. (G.T.)